England just beat Paraguay 1-0 on a 3rd minute own goal flick of a swerving
Beckham cross, how drab. There was swagger aplenty from the fabled midfield of
the Three Lions - Lampard, Cole, et al with heads on a swivel throughout the
match - though it felt like their intent was more often to catch a glimpse of
the surname on the back of the jersey than to hold off a Paraguayan opponent.
And this will be the downfall of the England Glamour Boys. For all their claims
to toughness and stick, and in spite of true hard men John Terry and Gary
Neville (yeah, I said it), England are a bunch of overrated, average skilled
prima donnas. Peter Crouch didn't get to do his robot celebration because he
didn't have a single look at the net. But he is a robot, that much is certain.
Michael Owen is far from match fit. The offensive threat of the ranging midfield
produced three, maybe four looks at goal from outside the penalty box, the best
chances left to a pair of Lampard strikes that didn't so much worry the goalie
as require him to participate in the motions of the game. There was no England
possession of note. Steven Gerrard forgot to participate. Beckham played with
fight but his often visionary final balls kept going to the Paraguayan center
backs. The thought bubbles over Beckham's head when he went into 50-50
challenges read like apologies to his countrymen for being, as the Univision
announcer called him, Mr. Spiceman. There is an inexplicable arrogance built
around a shell of insecurity pervading the English sideline. As a fan of futbol,
impartial as a function of being American, I found more to cheer for in a
Paraguayan side playing against bad luck for 87 minutes. Paraguay isn't winning
anything this year, but neither is England. That said, with the return of a fit
Wayne Rooney I am fully prepared to eat my words. Rooney plays without a concept of failure. But Rooney's Achilles may be close to his achilles, as the victim of
two broken foot injuries in the three years since he's taken on otherworldly
footballer status. His fragile feet are
responsible for hitting the shit out of the ball, an irony that doesn't betray the
whole of the English side. Otherwise, this is a team of effete and effeminate
playboys playing at being working class. It's not working, and there's no class.
All of these feelings will be forgotten in fifteen minutes, when T&T kicks
off against Sweeden and the planet Earth spins hurling through infinate space
and I begin to critique the enviable brilliance of 22 other people. Go on Dwight
Yorke!

Homey will be back with the quickness when he's got that itch, so we hope you enjoyed.

Seen mostly through the window of a pizzeria on a tiny television, the streaks of yellow and blue seemed more composed than their opponents, the white dots. But the outcome of this match was never in doubt, as the Ecuadorian's possession of two out of the three primary colors exceeded that of the Poles, who have only red to show for their troubles.

A fine beginning to any tournament. Six minutes in, a goal of the highest quality, courtesy of Philipp Lahm, one of the young stars of the European Tournament of 2004. And a prompt reply from Paolo Wanchope, which only made it easier to root for the Costa Ricans, especially when surrounded by 55 German male field hockey players and their girlfriends at a private party (yep, for those who don't already know, dudes rock them curvy sticks and short shorts out here on the regular -- no skirts though). Though the Germans put two more in succession past the Costa Rican keeper, the Ticos didn't give up, showing spirit reminiscent of their performance against Brazil in the last World Cup that resulted in a second goal for Wanchope. Cue my smiles, and dirty looks from the rest of the room. But the equalizer was not to be, as Torsten Frings unleashed a shot somehow more impressive than Lahm's, and even I can't hate on that. 4-2.

Golden moment: Oliver Kahn, the deposed German 'keeper, seated on the bench, chuckling to himself and Chelsea defender Robert Huth, and loosening his pants like Al Bundy in front of the television.

255km on the Back of My Daredevil 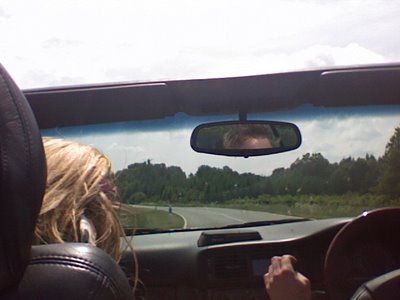 They try, and try. Hate for days. But: They. Can't. Hold. Your. Boy. Down. How does one get from Hamburg to Berlin? Top down, chrome spinning, of course. Free wireless on the Autobahn. What? Don't say say the top's down; say the titties is out.

As one of you may know, the World Championships of Football begin today. The Schopenhegels of Germany, gracious hosts of the tournament, enter into a mortal struggle for the soul of the universe and a free 40G Ipod against the Cloud Foresters of Costa Rica. The world is watching. As befitting an occasion of such crucial importance to national pride, and despite the quantifiable gulf in the footballing prowess between these two nations, Germans are taking this game quite seriously, preparing detailed dossiers on the Costa Ricans -- defensive formations, danger men, real estate investment options, etc. In fact, the Germans prepared for today's match not merely by kicking soccer balls amongst themselves repeatedly, but also by watching a short documentary about what makes Costa Rica, and Costa Ricans, tick.

To essentialize, Germans like philosophy. Part of the pleasure of watching international soccer comes in reducing an entire nation, a people, and their history, to one or two representative and easily explainable characteristics that describe best how they kick a ball about a field. Therefore, the idea that Germans would not only appreciate watching game tapes about their opponents's skills, but also ones that described those opponents' culture, their competing philosophies on life, and the bountiful biodiversity of that country's rainforests seems just about right. It's not a knock -- it's rather admirable really.

Either way, game on, we say.

Your boy Stijls is here for the duration, out in Europe, spending Euros, so kick back and keep clicking.

Allow me to reintroduce myself... 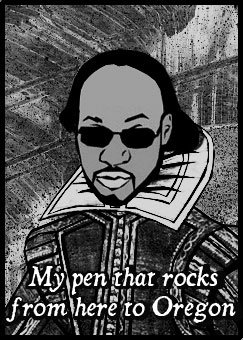 Wilkommen to Blue&Cream -- the Eff-ing Internet's Elysian Fields, Webternet Valhalla, Fothermucking Blog Shangri-La -- that most hallowed of spots, where Ghostface and Thierry Henry are forever locked in constant conversation. We'll be blessing you with that good when you need it, and even when you don't. I could tell you more, hit you with the B&C mission and all 'a that-ness, but if you ain't know by now you better ask somebody. Actually, you can just ask him:

"An artist, in my eyes, is someone who can lighten up a dark room. I have never and will never find differences between the pass from Pele to Carlos Alberto in the final of the World Cup in 1970 and the poetry of the young Rimbaud, who stretches cords from steeple to steeple and garlands from window to window. There is in each of these human manifestations an expression of beauty which touches us and gives us a feeling of eternity."

Also, Welcome to the internet. Enjoy yourselves. Hallo back y'all.