Diary of a Time-Traveling Gangster

Just Got Back From The Intergalactic Rapping Championships

So I'm lamping a bit

People always ask me things. They say, "Stijls, was Theodor Adorno right when he said that, 'Enlightenment's program was the disenchantment of the world?' " Or: "Yo son, can you explain me Baudrillard's conception of seduction? Can you break that shit down for me?" Or more common, "Is Dipset in this bitch?" I generally answer "Yes" to all of these. But the question I've been fielding most of all lately is, "Why have the French progressed so far in this 2006 World Cup? Their players are so old?" The answer is quite simple:

Djibril Cisse is a time-traveling gangster.*

Ask yourself these questions: Why is his hair so consistently awesome? [Alien barbers.] Why has he severely, gruesomely broken both of this legs in successive seasons? [Because of the skeletal fragility hastened by long periods of space travel.] Why can't he score goals for Liverpool? [Cos' they play in Liverpool.]

It seems quite obvious to me that the Zinedine Zidane that's playing out of his skull on pitches all across Germany is not the Zinedine Zidane of today, but that of 1999-2000. Claude Makelele? Nope: Makelele 2002. Lilian Thuram, currently of (relegated???) Juve? Uh-uh. Thuram 1998.

Hard to believe? Come on. We've all seen Bill & Ted. That shit works. (How else do you think Ribery's face got like that. Mangled in the machine, dude.) You're telling me that Cisse's supposed to be sitting on the sidelines, sadly watching his team make a run to the World Cup semi-finals as he heals from injury? Puh-leeze. Dude's chilling in intersidereal space, waiting for opportune moments to snatch up the stars of the past and replace the stars of the present with them. That is, when he's not blowing up the spot, a/k/a 'the supernova' with Dre 3000 and Delton 3030, co-pilot and navigator on the Spaceship Mother Earth.

Don't be surprised if you see "Thierry Henry: The Monaco Years" (that should be a TV show) out there tonight. Just saying. You'll have this guy to thank. 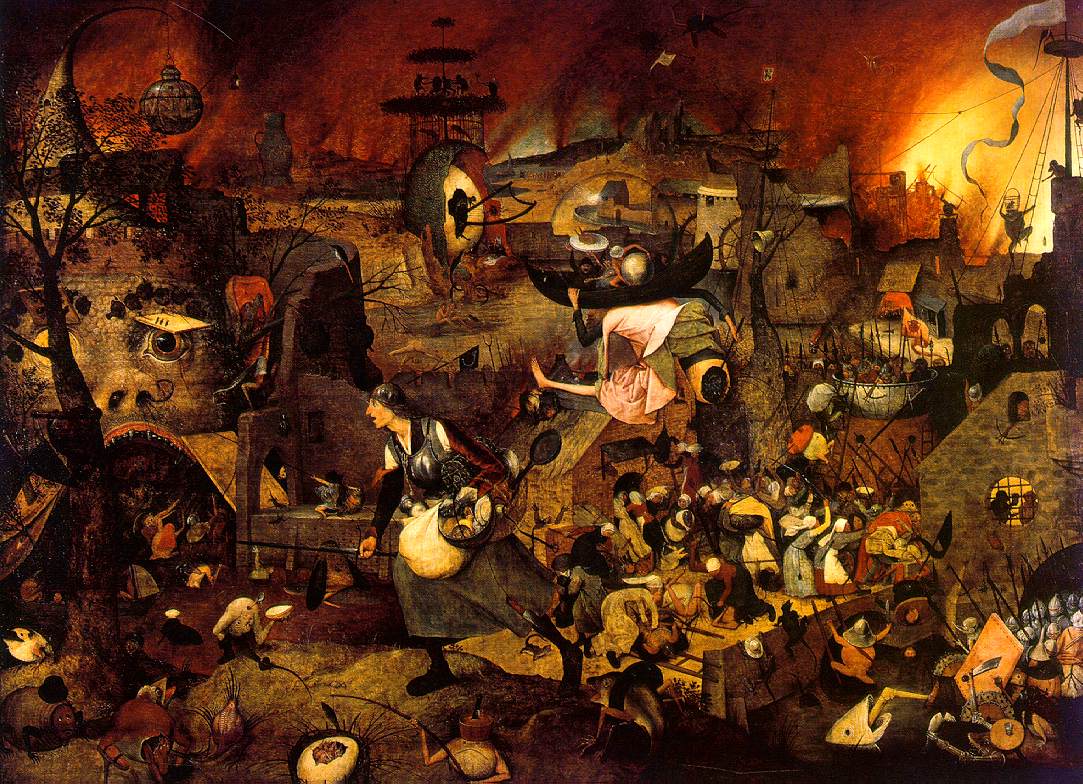 Okay, like a nation scorned. This is Bruegel, b/t/w.

In the middle of our life's journey, it sometimes becomes necessary to damn those who destroy a host country's hopes to hell. So take a trip with me, D. Alighieri, and our boy Virg-who's-nice-with-the-words, through the Italian National Team locker room.

The Opportunists/Outcasts: Massimo Oddo, Simone Barone, Andrea Barzagli, Cristian Zaccardo. Residing on the shores of the Acheron, a/k/a the substitutes bench, these are people who did nothing in life for good or evil, and are doomed to eternally pursue a banner and be pursued by wasps and hornets while maggots and other insects drink their blood and tears.

Second Circle: Francesco Totti. For the lustful. Punishment includes being blown about by a violent storm without hope of rest, fine for a midfielder who flits about the field in various modes of concentration.

Third Circle: Filippo Inzaghi. Guarded by Cerberus, the Third Circle of Hell is for gluttons of any stripe, especially those who generally score gluts of terrible, ill-deserved goals.

Fourth Circle: Alessandro Nesta. Those of a miserly nature reside here, regardless of whether this quality respresents care with money or an unwillingness to allow opposing forwards opportunities to score.

Fifth Circle: Gennaro Gattuso, Marco Materazzi. The wrathful (which describes the former) are doomed to fight each other here on the surface, while the slothful (the latter) lie gurgling beneath the water.

Seventh Circle: Daniele De Rossi. Clearly, this circle houses the violent. Have fun elbowing the Minotaur in the face, buddy. It'll be the Inner 7th Circle for you: Violence against God, Nature, and Art get you afterlife in a flaming desert with fiery flakes raining from the sky.

Eighth Circle: Vincenzo Iaquinta, Fabio Grosso. Those guilty of deliberate, knowing evil, a/k/a/ the fraudulent reside here. Falsifiers that you two are, you shall be afflicted with various diseases, perhaps one that keeps you rigidly upright forever.

Ninth Circle: Mauro German Camoranesi. The ninth circle is for traitors, like those born of Argentine parentage, but who choose instead to play for Italy. And of course for those who choose to wear their hair like a samurai.