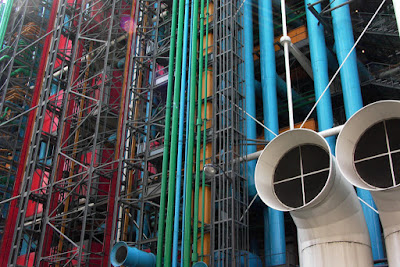 Last time Don Rodriguez was lost in a rainy Paris for seven hours waiting for the TGV to take him to Milan (only then to, according to him, smoke other people's smoke in a non-smoking cabin on an Inter-city "express" to Rome Termini) he visited the Centre Pompidou. He remembers liking it, and more than he thought he would. Having assumed it would be one of those buildings that seem theoretically cool when your arch. prof. runs through the, um, theory behind its structure (it's "inside out!" "form follows function!" "service becomes externalized!" "look at the pretty colors!") it's actually quite pleasing to be inside, especially the tube-scalators. And you might not think it, but if you approach it from the right (i.e. wrong) angle, it can sneak up on you, though that might be due to Don's dampened memory of the (un-)airiness of Paris streets.

That's not even Don Rodriguez's best story about architecture, or even about architecture in France. On a more-than-random day-trip to Bordeaux that ended back on a beach in Biarritz, with newly purchased bottles of wine and the openers to open them and the ingredients of some never-written Hemingway short story you remember liking as a teenager then feel really embarrassed about liking when you come back to it with years behind you all-too-obviously present, Don and Friend "found" the law courts. They were deserted -- just completed, actually -- and thanks to the laissez-faire (ha!) attitude of French gendarmes there was not a guard in sight. So Don and Friend proceeded to walk in and out of these pods-that-were-courtrooms, sit on the judge's bench, voir dire the witnesses, and object strenuously to that line of questioning. And this was all before the wine, apparently.

This is Don Rodriguez's roundabout way of big-upping Richard Rogers on winning a Pritzker. Rogers deserves Pritzker props not merely because he's made it to his early 70s and found much success along the way without having found it necessary to resort to wearing a pair of Corbus for 'tect respect. For instance, there's rarely been a bad -- or maybe I should just say uninteresting -- photo taken of his Lloyds Building in London, where one of the more iconic, futuristic exterior staircases on the planet hangs as fodder for flash photogs everywhere. But it's more his consistency, and consistently intriguing designs that prove his worth as this year's laureate.

The 2007 Pritzker Laureate Photo Kit is really worth taking a look at, if just to see something called his "Shanghai Masterplan" and "London as it could be, 1986." There will be some Rogers coming NYC way "soon" too.