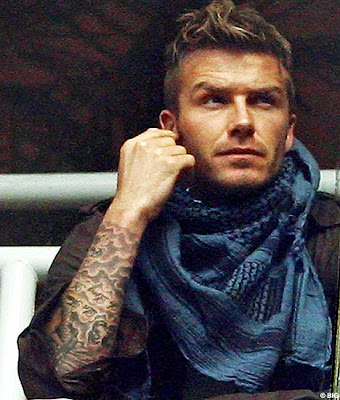 Or something to that effect.

Either Don Rodriguez is doing his part to prepare America for the already ridiculous level of scrutiny with which David Beckham is already looked at in places that do not solely associate the man with movies where he supposedly bends things, or he's cashing his fat, pound sterling check from David's publicist.

But anyway, dunny got a new tattoo.

Seemingly derived (OK, maybe only in the Don's free-associative mind) from the Dungeon Family School of forearm ("sleeve") tats, it appears that his new arm art consists of a mixture of scenery and text. We're sure the pictures are pretty, but we're more concerned with the words here, as is the classics editor of the Times Literary Supplement, since the message is a Latin slogan rendered in English on Becks. To wit:

The original reads in Latin: “Oderint dum metuant” (a nice example for you Latinists of the use of “dum as proviso, plus the subjunctive”). According to the Daily Mail, Becks first of all wanted the real Latin, but it was the word dum (“provided that/as long as”) that caused the problem. Could it be taken as a reflection of the mental agility of Mr Beckham? Better perhaps to play safe by avoiding it entirely?

In fact as any classicist must know, the word ‘dum’ is only part of the reason why having “oderint dum metuant” or its English equivalent might be an own goal.

Now, this is apparently not the first time Beckham has run afoul of spelling, grammar (or here, accidentally advocating tyranny) in terms of inscribing something on his person that can't easily be removed. Supposedly the tattoo on the inside of his left arm -- "Victoria" in Hindi -- actually spells out "Vihctoria." Which is tragic and hilarious. But anyone who's watched Miami Ink even once -- and I've watched it twice goddamit -- knows that for some reason, people find it nigh-cancerous to actually go and check on the spelling and/or grammatical/syntactical correctness of a phrase that they are having, painfully, applied to their body. Go figure. Or don't, then have someone tattoo it on your face.

Next thing to prepare America for re: Becks: his voice. Think Mike Tyson.

UPDATE: An eagle-eyed reader pointed out that I neglected to give those reluctant to click on the TLS link the English translation of D.B.'s tattoo. It reads: "Let them hate (me) as long as they fear (me)."