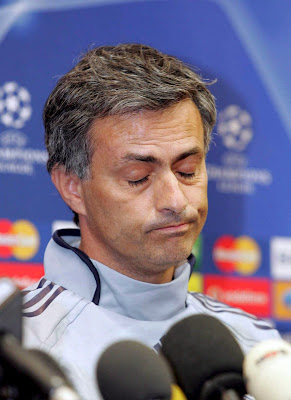 Because he could be absolutely cutting.

And when he did want to answer a journalist's idiotic question, it was always with inimitable style.

And never more so when talking about himself -- here, foreshadowing:

So I know all about the ups and downs of football, I know that one day I will be sacked.

But you have to feel he was prepared for it, and of course he was:

I was nine or 10 years old and my father was sacked on Christmas Day. He was a manager, the results had not been good, he lost a game on December 22 or 23. On Christmas Day, the telephone rang and he was sacked in the middle of our lunch.

The man was a pre- and post-game genius (We can argue about his in-game tactics later). He turned what are without fail dour, idiotic, and desperately pedestrian interviews into an art form, and he knew it.

When I go to the press conference before the game, in my mind the game has already started.

A veritable font of hilarity he was:

Of course there was the time he slapped Carlos Puyol. So sneaky. Look at Puyol's face: what could he do? Just fantastic.

But this is my all-time favorite interview. It's Mourinho, a day before Chelsea took on Barcelona in the Champions League (for the first time, I believe), naming his side, Barca's side, and even the referee, the now-retired Swede (largely because of that game) Anders Frisk.