1nce again, the Schopenhegelian Germanic hordes defeated Argentina's Borges Boyz, not surprisingly in a penalty shootout. Baboons from here to the pampas have described this match as "tense," and have zeroed in on Argentine coach Jose Pekerman's early substitution of Riquelme and forced substitution of 'keeper Abbondanzieri (which limited any later additions of either Lionel Messi or Javier Saviola) as turning points of the match, and they're absolutely right -- but that's not the essential, interesting bit of it all.

What remains remarkable to me is how easy it is to tell who's going to miss their chance in a penalty shootout, simply by looking at the shooter's face as they line up at the top of the 18-yard box. It's a skill I picked up, most likely by hanging out way too much with my Southern Hemisphered homie Gosfais, a former wraithlike goalkeeper with a philosophical capacity (I'm sure) equal to that of his spiritual & positional predecessor Al B. Camus. Seemingly obvious, but foolproof nonetheless. For instance: Riquelme, given the chance to tie the Champions League semifinal second leg, wore an impossibly even sadder-than-normal face before shooting. Result: Jens Lehmann, the German hero of this W.C. quarterfinal, saved his shot with relative ease. Sure, this after-the-factness looks terrible, but we're gonna proceed anyway.

Roberto Ayala: Perennially haunted by the spectre of Dennis Bergkamp turning him out like Bobby did Whitney back in France '98, Ayala's eyes were hollower than Paolo Maldini's cheeks at an Armani photo shoot. [No photo necessary - Ed.]

Esteban Cambiasso: The only balding player on whom you can bet the farm animals when it comes to penalties is, of course, Zinedine Zidane (Had Pekerman substituted differently, this could have been Pablo Aimar shooting instead). [B/T/W, the "Shit But You Don't Know It" jack was completeley unintentional - Ed.]

And though it may seem like Brit-bashing at this point,

Frank Lampard: Prissy T-Rex arms only get you so far in this world, and having all the blood drain from your already too-pale face, only to settle, leaden, in your boots does you no favors when you're the first (technically best) penalty taker.

Steven Gerrard: I think it was an ESPN writer who noted that Gerrard was most visibly affected by Lampard's opening miss for England. That empty feeling carried over into his walk up to the spot and the timid stare he gave Portuguese 'keeper Ricardo right before shooting (Ricardo himself has claimed to have been able to see where the England player were going to shoot "in their eyes" which is a lofty one for sure, but from first to last these guys were about as transparent as my spookfaced friend).

Jamie Carragher: Once his first shot was called back for taking it too early, there was simply no chance he'd score on the second. Even he knew that; hence, the unsurprised look on his face as he walked back to the center circle to watch Ronaldo put them out of their misery.

Luca Toni, Not Sleeping With Fishes

When you sit less than 5 rows away from Francesco Totti, it becomes immediately apparent that he is only the rarest of times in touch with this plane of existence. This is not a compliment. Sure, he wanders about the midfield, occasionally nudging on a brilliant ball, but for the most part he's dreaming -- of what I don't know. His wife, Roman gelato, the dude sitting next to me smoking hash, twenty Nespresso machines lined up in rows, a Rick Ross remix of Carla Bruni's Quelqu'un M'a dit -- who can say for sure?

What is certain is that Andriy Shevchenko has the worst pouty-face in international football. It's almost sickening to watch: Middling Ukrainian midfielder spots Sheva calling for a pass, pass is delivered 4 yards off target, Italian defender clears, Sheva throws tantrum fit for a 3-year old. 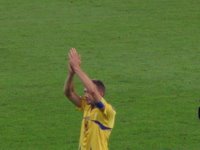 Yes, it's clear that no one on the Ukranian side has the quality or epidermal oleaginousness of Andrea Pirlo, but that's no reason to broadcast that thought to the world with your screwface mug every time you don't get the service you're used to on your multimillion dollar club team. But Sheva did kind of make up for that petty insolence after the match, trotting over to the rabid Italian fans and giving them a hand for their support during his years at AC Milan (despite the fact that they booed him lustily every time he touched the ball, now that he's Chelsea-bound).

And as much as I love to hate them, the sentiment expressed for their fallen comrade Gianluca Pessotto was genuine, and lovely to see: 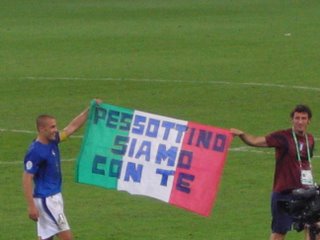 But then you hear about this and all those warm-fuzzies crust up like the cold in your eyes come morning. Either way, it all makes for an interesting match this evening. I wonder how the Italians will spin this one, given it's the Germans suffering after scandal...

Why you don't post another video! the link is broken.

Close your eyes, give me your hand, darling
Do you feel my heart beating
Do you understand
Do you feel the sameLas Vegas EscortLondon Asian escort agency