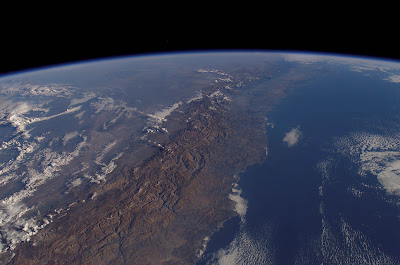 If only this was the picture you got Google Earthing Chile-Brazil. [It's Chile.]

Also during the year I was in Chile, the Olympics were in Australia, and Chile there made an extraordinary run to the semifinals or finals. The games were broadcast at 4 in the morning and I remember my drinking train ran right through their win over Nigeria -- I actually couldn’t see the TV and later vomited on a wall -- it was Jota, red wine and Coca Cola. If I am the first person to name Jota as perhaps the metaphor for Chilean geopolitics, you can just mail me the diploma.

An Olympic squad is an under-23 team with only two golden oldies allowed, so that showing should bode well for the current Chilean squad, though they of course didn’t qualify for the last World Cup. That bronze medal team had old Zamorano, who around then began the standard Latin American retirement procedure by moving from Milan to Mexico, and whose place in the high-middle of world soccer strikers no Chilean has assumed since. I think that Chile might have some 17 year-old who was bought by an AC Milan or something and who is probably on their youth team still, maybe he will play. Who knows?

Their coach was ‘disappeared’ after the cup. I read the paper the day the new one was hired and several prominent and agéd members of Brazil’s football pantheon expressed supreme befuddlement at the choice of Dunga, a player to be seen in ’94 highlights and whose ears gave him his ‘nick,’ as Snow White’s Dopey [= Dunga (dubbed)]. Worse, recently Brazil lost to Portugal which is annoying and incestuous thanks to the fact that the best coach in the world is a different Brazilian, Filipão, maestro behind the 2002 win and several Brazilian club dream seasons and who has permanently lifted Portugal up above their own level.

After Filipão beat the Brazilians he was asked about Dunga, and said, ‘Dunga is doing what he has to, trying out new players and giving everyone a chance.’ I assume this is the truth. More importantly, imagine being the new coach and losing to a guy who is so made, who carries his steak-belly like a trophy, who was offered your job but declined, and then reading in the paper his evaluation of your coaching. I am sure nobody asked Dunga what he thought of the job Filipão is doing with Portugal -- why would they? That seems to sum up where Brazil is right now -- a low point in the cycle of empire, overshadowed by the feats the past.

Maybe this guy Sobis will play forward. He made his fame just as I arrived here, scoring twice to win the Copa Libertadores finals and subsequently moving to Betis in Spain. He is a little wiry blonde guy with a Latin mullet never to be mistaken for the prancing gel-job of a Swede, and I have the feeling that he is the medieval type of player who is playing on the Selecão right now but will be lucky to be on the renaissanced bench of the next World Cup.

In his scrubby way he reminds me of a Chilean. Right now in Brazil a gente não ta nem ae. Not even caring. We will let the team get better on its own and come back to us when it’s presentable.