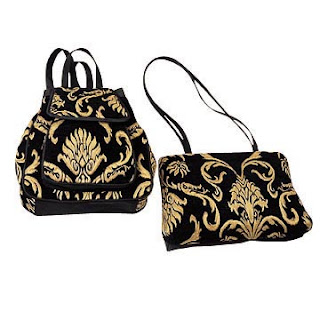 Where all the work at.

There is a rather elastic term of which I'm particularly fond that the English use to describe the occasional disagreement, tiff, to-do, row, etc. (Note: While I'm at it, I'm also a fan of "rowing," which sounds like "outing" -- the gerund verb form of "row" often used by The Streets and assorted other louts).

That term is "handbags."

It gets applied rather liberally. For instance, you can describe two gents facing up against one another as "a bit of handbags," you might descibe their punch-feints themselves as "handbags," or, "Oh, and now the ref's got to sort through these handbags." (Okay, maybe that last one's a lie.) Often employed by commentators in those (quite common) instances after a mistimed tackle where the offended player has something extra to say to the forehead of his offender, the term seems particularly well-suited for footballers, who seem to prefer Eskimo-kissing to swinging on each other.

Except for Valencia's David Navarro. But that's another story.

(WATCH: David Navarro break a man's nose, then run like a bitch.)

There might not be a better word than handbags -- unless we consult our French-English Slang Dictionary -- to describe the latest verbal joust in which Arsenal manager Arsene Wenger has chosen to engage himself.

A few days earlier, Wenger had this to say about the injury woes of his and France's star striker, Thierry Henry:

“I feel Thierry has been badly managed by the French national team. The World Cup Final was on the July 9, and I gave him a holiday until August 4. Then he came back and we prepared him. I left him out of the Champions League qualifier against Dinamo Zagreb. They [France] called him up for a game on August 16 - less than 14 days after he came back [from Germany] - and they played him for a whole game against Bosnia. After the World Cup final, why did they need to do that?”

Today, France coach Raymond Domenech (whose Wiki is both interesting and hilarious) responded:

“I’m seriously starting to get tired of Mr. Wenger. [Wenger] does not know everything and is not the only one with the right to exist in football. Even [UEFA president] Michel Platini has noted that his remarks were stupid. [Wenger] is saying that a match in August can explain an injury in March. But it has to be known that every time Henry has played for France, he was playing for Arsenal three days later.”

My interest is piqued not merely because they're French, and when I hear "handbags" I may or may not envision two Enlightenment philosophes wielding handbags, intelligently bruising each other, leaving puffs of wig powder in their wake. Such a situation would surely require each man to slap the other gently, yet firmly about each cheek with an elbow-length velvet glove before the succeeding event could take place. This clearly has not transpired between Wenger and Domenech.

But oh, how we love Domenech's response. Not only did he take pains to establish that Wenger, who has a rather professorial reputation amongst his coaching peers, is not a know-it-all, but Domenech apparently felt the need to go all "Mirror Phase" upside Wenger, in effect affirming our existence -- yours, mine, his, everyone's -- and dooming Arsene to narcissistic toddler-hood.

Sonned by Lacan. Ouch. Yet somehow fitting. We can only await Wenger's almost certainly entertaining response.

After all, this is a man who, when Sir Alex Ferguson claimed his team had the better run of form at one point during a season past -- an assertion not supported by the evidence -- replied, "Everyone thinks they have the prettiest wife at home."

UPDATE: Baby girl, why you don't call me no more?