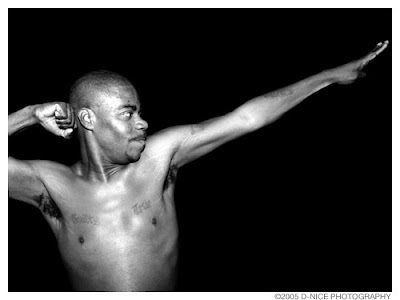 There are few people who I'm happier about getting press and success these days than Tracy Morgan.

I hate for this to be one of those "I remember when dude was...[insert self-aggrandizing story about how you recognized current star's genius as a bit player on some short-lived TV show]" posts, but...

I remember grammar school weekends of staying up late to watch Saturday Night Live in its entirety so that I'd still be awake for Uptown Comedy Club, which played right after SNL -- opposite "Showtime at the Apollo" -- on Fox (which I think was still just Channel 5 or WNEW or something in NYC). The Big Thing then was kids who wanted to entertain at the lunch table the next week would competitively memorize as much of the sketches as possible, then when recounting them got beat, just use the funniest bits as code/cool/buzz words to exclude/belittle those who hadn't watched that weekend, and were thus doubly not in on the joke. Real terrible-type kid shit.

So sure, I watched for Hartman, Farley, Myers, Rock, and Sandler (this was early 90's, decadent-crest-before-precipitous-crash era) to pass with all the white kids, etc., etc. Suppose it's hard to hate on "Matt Foley" really.

But me and my boy Lu (who, despite the theme of this post, was not Dominican, but Colombian) would commiserate outside during after-lunch recess, obviously after throwing the ol' foil ball around a bit, and talk "Biscuit."

Biscuit was one of the characters Morgan used to play (allegedly because he was "a biscuit away from 300 pounds") in sketches, and occasionally during the concluding segment, which was a round of the dozens (a.k.a that Wilmer Valderrama show, but funny) featuring some of the cast. This was also when "snapping" was huge; like the writing-about-the-Arcade-Fire of its day.

In character, Tracy Morgan used to wear a beanie with a propeller.

WATCH: Tracy Morgan on Uptown Comedy Club (though he actually loses this battle, which was very rare.)

So Lu and I would snap on each other's mothers pretending that we weren't using the same ish we just heard the weekend previous, and still go buckwild when one of us busted out the A-game lines.

Suffice it to say I was geeked when TM finally made SNL, since it sort of felt like we -- me and Tracy, that is -- made the big time after toiling "together" in the dregs of Saturday late-nite TV. And dude killed it, all the while somehow still on the low.

Somewhere between SNL and now, Morgan did a few hilarious spots for ESPN video games, the best of which featured Ben Wallace and Jeremy Roenick (which brings me back as well since Roenick-as-gaming-entity was too a huge part of my grammar school youth)

And now that he's the livest wire on 30 Rock and blowing up the spot on every late-nite talk show (and some early-morning ones too if you check the link roll to your right), I think the boy deserves his due.

Just to bring the whole self-aggrandizement theme home as well, this clip from the '06 VH1 film Totally Awesome -- which I have not seen, though if Morgan is as good in every scene as he is here, I just may have to -- is hilarious not just for the karate-chop-beatbox-scale (you'll see), or even for the coining of the term "sweatpants money," (!!!) but also b/c TM namechecks the Decepticons, an infamous gang about which anyone who grew up 'round NYC in the 80s would have undoubtedly heard.

[Additionally, there's probably about 30-40 minutes worth of dude's stand-up on YouTube that I'm not about to post. Yet. In the meantime, just looking at the list of people he's impersonated is funny]

P.S. This was undoubtedly my most Tom Breihan post ever. It's all love, T-Bone.

Excellent. I first became aware of him on SNL, and have adored him since . My favorite sketch of his is Astronaut Jones, with the badass Esquivel-esque theme song. http://www.youtube.com/watch?v=zv-PbHiNeeQ