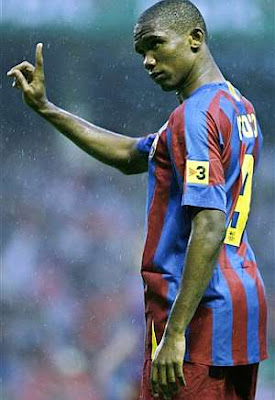 The NY Times deigns to cover soccer in a half-page or so, buried deep within the Sports section every Tuesday thereabouts; this interview with Barcelona and Cameroon striker Samuel Eto'o was a weekend rarity.

Eto'o is a fantastic player, and one with principles. As the interview mentions, Eto'o was subjected to racist chanting throughout a match in Zaragoza last year, and threatened to -- and almost did -- walk off the pitch before the end of the match (The congenial Ronaldinho helped convince him to finish it out). I'm still rather torn as to whether he should have continued or not. One one hand, I would have liked to have seen the effect the walkout would have had on the match, the league, and the country -- which doesn't have the best reputation for tolerance -- (it's quite poor, actually -- Wikipedia writes the following sentence with a straight face: "Referee Fernando Carmona Mendez did not mention the incidents in his match report, commenting only that the behaviour of the crowd was 'normal'."). Yet, I'm also glad that, in a way, he didn't allow the racists in attendance to have the final say and force him out of the stadium.

You can see Eto'o near the end of this video pointing at the skin of the Zaragoza player Alvaro -- who I believe is Brazilian -- while gesturing at the crowd, seemingly urging them to acknowledge that, "Yes, you have a black man playing for your side as well."

This has always meant little to racist fans. What first fascinated me about this subject was the fact that some teams' fans will throw bananas and the like not merely at the opposing side's black players, but sometimes their own. Which offends in every possible conception.

But back to the interview. I'm all for Jack Bell making minor-to-colossal errors in all future interviews, because that was certainly the most entertaining answer in what was generally a rather dry Q & A. Not hating. Just saying.