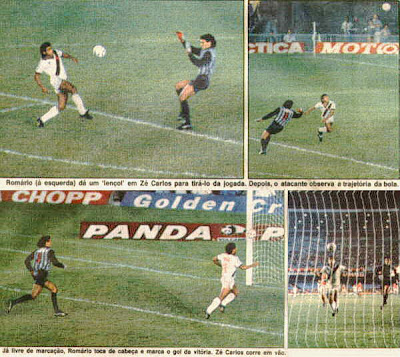 We don't give a fruck it's not your birthday.

I'm rushing to write this because Romario might score his 1,000th career goal any minute now.

Or not, depending on who you believe.

This is the issue: Romario, aged 41, nicknamed "Shorty," is currently on 998 goals for his career. By his count. 70-100 or so of those goals were scored either as a teenager, an amateur player, and some even in scrimmages and unofficial matches, some against weekend-league level competition. (Though I hate the American-writing-about-soccer-tic to equate everything with baseball or whatever, just think whether or not you'd have a problem with Barry Bonds including all the homers he hit for touchdowns in the third period, down 40-love, when he was in Little League and at Sunday Beer League Softball). Here are some facts, almost all of them are funny:

Here is the other thing: WHO CARES? Sure, Pele does, since he's the only other Brazilian to have scored more than 1,000 goals (And honestly, he scored 1,281 officially recorded goals in 1,363 matches, scoring his 1,000th goal at the Maracana stadium against Vasco in 1969 at the age of 29, still in his prime -- so he does have a right to at least be a bit peeved). And this guy [Daaaamn!].

But still: just think of how awesome our world would be if everyone kept life tallies of the things we do, or the things we love to do, every day. Obviously Romario's scored more than 1,000 goals in his lifetime. He may be scoring goal number 20,000 for all we know. One-a-day for 41 years, give or take, is a shade under 15,000. I would love to see, for instance, a count of how many exclamation points one of my favorite writers has used since he discovered punctuation. It's the idea that he's been counting, and admittedly the shamelessness in doing so, that's so interesting to me.

I urge you to read the rest of this fine Financial Times profile by Simon Kuper -- and to listen to an even finer (and rather appropriate!) Jorge Ben song -- as I've made part and whole available below. My favorite bit of the FT piece:

Born in a Rio slum, Romario is the supreme Carioca, who expresses his patriotism partly by buying the city's real estate. Outside Rio his oddities are less appreciated. "In Sao Paulo," growls a Paulista, "he is regarded practically as an Argentinian." Romario is that characteristic Rio type, the malandro: a chancer, a fun-lover, a rule-breaker.

At 22 he left home to join PSV Eindhoven. A malandro and the Dutch workplace were not an ideal combination. Here was a man whose hobby was sleeping (14 hours a day); who said his team-mates could not play; who flew home to Rio at will, fixtures or not; who liked nightlife so much he intended "to keep going out until I am 90 years old". In games he rarely moved, yet averaged nearly a goal a game.

He treated his European years as an exile, a strictly money-making exercise: "In Holland I work; I live in Rio." He failed to comprehend the Dutch habit of turning up for appointments or the way they expected great footballers to obey rules, though he did appreciate Dutch girls.

But he always scored, and eventually Barcelona signed him. Even at the giant club he remained blase. Guus Hiddink, once his manager at PSV, remembers visiting Barcelona as coach of Valencia. Romario was about to kick off the match in front of 100,000 spectators when he suddenly told the referee to hang on, jogged to Valencia's bench and kissed Hiddink on both cheeks. To Romario, the match was just decor, with him the only character. In an increasingly corporate sport, his selfishness was almost heroic.

Finally, I suppose I'd be remiss if I didn't put something from YouTube up -- since that seems to be the fallback steez these days.

Oh, and right. I couldn't find audio of this to sendspace so you'll have to do with this YouTube clip, but HERE IS A RAP SONG WITH ROMARIO AND HIS FELLOW BRAZILIAN NATIONAL EDMUNDO, RAPPING. IT IS CALLED "SOMOS BAD BOYS." [I WILL NOT TRANSLATE THAT.]

It's super-clumsy while altogether irresistible, and if you put one of them in a dress, it's not ten steps away from Bonde do Role. [Whom, by the way, Brazilians I have spoken to think it's funny and cute that out of all the bands in Brazil, they're making it here.] Enjoy (the fact that I resisted making the "ten stepovers" joke).