Look at my Fashionista. 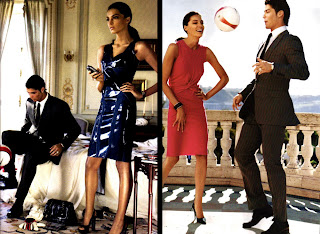 Got Benjy lookin' all googly-eyed and silly.

It is a poorly disguised internet secret that posting pictures of Cristiano Ronaldo on your blog rockets up hit counts significantly. [A brief shout to all the ladies out there Google-image-checking for "the Boy" as Sir Alex so often calls him: Hello, ladies.] Internet, your spot is blown.

It is also poorly disguised secret amongst fans of Manchester United that their own decrying of the sartorial excesses and fortunate bone-structure of its current and fleet-of-foot Portuguese Number Seven are desperate attempts to deflect attention from the childlike (okay, girlish) pride they feel when dude runs 70 yards past everyone on the other team and then scores. Or does this. Gary Neville, your spot is blown.

B/T/W, "cheers" to C.R., whose English -- while not great enough to avoid the awkwardness of of recently referring to oneself in the third person in a language one is still unfamiliar with -- was good enough for this bit of dry humor [taken from the Vogue article where the pictures above appeared]:

"According to the newspapers I have 20 girlfriends, but I have only met two or three of them."

Even so, its things like this that make people want to do this.