Or put some money on your head. 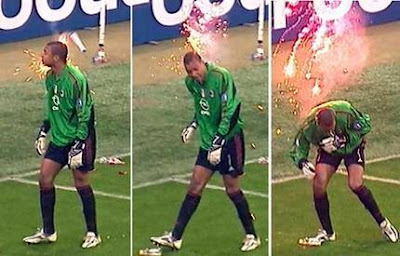 Poor Dida. Despite from birth having to overcome the borne-by-the-world preconception that "Brazilian goalkeeper" is a contradiction in terms, and later the ignominy (not to mention fright/health concerns) of being struck in the head by a criminally overzealous Internazionale fan's flare (see above) during a match a few years ago, AC Milan's sad-faced shot "stopper" isn't even worth a Benjamin on eBay [Cheers, Soccernet].

An angry AC Milan fan put Brazil goalkeeper Dida up for sale on the internet ahead of next week's Champions League semi-final return with Manchester United.

The 33-year-old, who joined Milan in 2000, was a hero after the shootout win over Juventus in the 2003 Champions League final but his popularity has slumped after a series of errors.

He was criticised following last week's 3-2 first-leg defeat to United at Old Trafford, when he flapped a Cristiano Ronaldo header into his own net and then left his near post exposed for Wayne Rooney to blast home a stoppage-time winner.

Dida failed to attract great interest on eBay. The price, before the Brazilian international was removed from the auction site on Friday, had reached 71 euros ($96.66) after 25 bids.