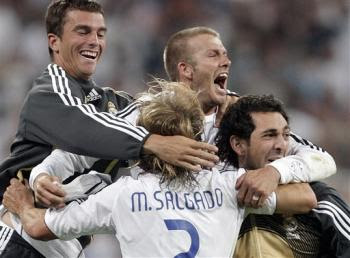 Exactly what Becks & Co. are listening to at this late hour, we're sure of it.

Let's set the scene: We're at Arena. It's late, and getting early. And from where we're standing, just over van Nistelrooy's bobbing head we can see Roberto Carlos, standing atop the bar, wearing one of those tiny sombreros and his game shorts, inviting patrons to admire the definition of -- and perhaps stroke -- his thighs. There is a sizeable line. The rest of the Brazilians are dancing furiously, Emerson throwing 'bows so as to give Robinho and Cicinho ample space to move. A generous soul, he is. Guti, having promised the team he'd shave his head if they won the league, has been fantastically successful convincing girls on the dance floor that he is indeed David Beckham. Iker Casillas is doing his level best to cock-block, as per usual. Guti hates this. Raul is having problems convincing people that he is Raul. Cannavaro never made it inside the club -- still outside posing for paparazzi. Antonio Cassano, who hasn't yet picked up Spanish (he considers it an inferior dialect of Italian, fit for children, maybe) and spends all his time with his fellow countryman, is sulking next to the bouncer, halfway through a pack of Ducados, which he'd be the first to admit are terrible cigarettes.

Our boy Becks? I think you know just as well as we do who he's with and what he's doing. Yeah.

But for, um, real, normalmente no soporto los merengues, but Don & Co. are genuinely happy for D.B. When this guy is on you side, you can't go wrong, can you?